At 9.30 am we have a players meeting. Among matters raised/highlighted are
• Change of last round. From the scheduled 24 December 2011 to 17 December 2011.
• On weekdays, game will begin at 7pm instead of 6.30pm.
• No switching of players allowed.
• Waiting time is one hour.
• Draws can only be offered after 10 moves.
• Appeals Committee. Najib suggested each team nominate one candidate via e-mail. List to be finalized/confirmed on 25th October 2011.
• Handphone. Cannot ring but can vibrate. Najib spend quite sometime on this, no doubt tried his best to make it flexible... but to make it simple...just off the damn thing!
• Pairings/ results will be e-mailed to team captain.
• Players can consult captain on draw offers

On lighter note, Najib informed that now DATCC no longer have 10 pm onwards free disco beat...(shall check it out this Tuesday), there is special mentioned, followed with well deserved round of applause on Saprin’s team (Carikomputer dot com) that consist of Saprin Sr and his 3 Saprin Jrs! Ok, now maybe today his team name is Carikomputer Dot Com..named after Saprin 2 or maybe 3 very successful computer shops...i have this feelings in 2 years time (maybe earlier) the team will develop to be a ruthless Carigaduh Dot com...takut! :)

First Round
Among some interesting games/results are Jianwen beat Sumant and well...I drew with Mashafizul. :)


Back home i did some analysis on this game. To my surprise from the final position, i am actually winning! 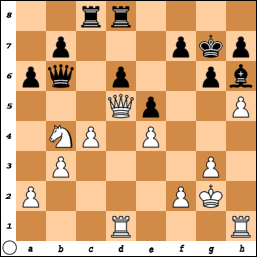 During analysis Zambri spotted similar idea on slightly different position but it never occurred to me that it exist on the very position when the game draw!