NF6 TOURNAMENT AND MY GAME AGAINST YCS

Few months ago, Syazrin asked me whether I am interested to enter one round robin tournament (10 players, FIDE rated, played over 2 or 3 months duration with average player ratings of 2100). Immediately I said yes. I have never in my life played a round robin tournament (those 3 minutes 5 rounds at Chesscube with entrance fee of 50 cubics doesn’t count) so…yeah, why not!

Then, many things happen. More responsibility at office, merger between EON Bank and Hong Leong Bank as well as classes and exams, I almost feel like withdrawing but since I have agreed earlier (and I know it is difficult to find last minute replacement) I soldiered on. Que sera sera, whatever will be will be…

My game against NM Yeoh Chin Seng
The ‘battle’ begin a few weeks ago, a psychological battle that is, when we (YCS, Najib and me) exchanging few e-mails on adjourning the game to 28th May 2011.

For this game, before the game, I followed Kasparov’s footstep in his match against Karpov. Come 5 minutes late! Though due to different reasons (Kasparov must be on last minute preparation while for me… never mind I keep it to myself) and my similarity with Kasparov’s ends there.

As soon as I entered DATCC, I saw Najib and YCS busy playing blitz in which Najib is controlling the game! Good sign or is it another trick from NM YCS to inflate my confident…

So the game started at about 9.45 am after we had a gentleman agreement that it is ok to on our handphone. Facing YCS, I realised he meant business, wearing that tiger yellow National jersey with 2 bottles (yes, two!) of mineral water ready at his back and I know, I am in for a tough time.

The Game
I opened with 1.e4 and he countered with Nc6 (Tony Miles speciality) 2.d4 d5. I think for quite sometimes here . Should I played a space grabbing 3.e5? which I believed my opponent has prepared beforehand and in which I know nothing about, or should I go for my favourite Blackmar Diemer Gambit by transposition 3.Be3 de4 4.Nc3 Nf6 5. f3 !?

I chose the third option. Albin Counter Gambit reverse. If its good with black it should be better with white or so I thought. I sacrifice a pawn for initiative but later realised the subtle different of black’s c pawn at c7 instead of c5 make a lot of different. Here is the continuation 3.ed5 Qd5 4. Nc3 ?! Qd4 5.Be3 Qd1 6.Rd1 Bd7. Black’s hang on to that extra pawn till the end of game.

Below is the game in full.


The Great Defender.
Somehow during the game and seeing how YCS manoeuvre back and forth on the last rank a’la Petrosian, on my mind I keep on hearing The Platter’s The Great Pretender…but ofcourse I hear it as defender and not pretender.

Oh-oh, yes I'm the great defender
defending my one pawn up
My need is such I defend too much...
Thanks
Many thanks for Najib and YCS for willingness to come on Saturday morning to make this game possible.
Posted by Ilham at 10:48 PM 2 comments:

2 months ago i wrote an article about Dominique Strauss Kahn (DSK) and how he love to play chess (pronounce this word carefully please!), how he is France's President material etc and suddenly that hotel incident (and we know what happen to him afterwards). Somehow there is this website under name Marginal Revolution linked its website with my article on DSK.

Never thought more than three thousand visitors visited my blog in a day. If chess odyssey is a listed company at BSKL, for sure i will be queried by Bursa or SC for 'unusual market activities'. :)

I have been playing chess for at least 25 years...way back when apple is still just a fruit (and nobody line up overnight to get one), when you can still smoke, make short draws (and not feel guilty about it), let your hand phone ringing (should you have one) when playing chess...that long.

I can even claimed that i started playing chess years before Magnus Carlsen born...so i know for sure that i had once, in time line, maybe around early 90's, play chess better than him! (Shut up!...Yeah, you laugh...i know)

Along this wonderful journey i have played many combinations (as well as and on most of the times, at the receiving ends of the combinations), from 2 steps checkmate to 4 steps checkmate, from B h7/h2 to smothered mate. But still, Caissa has never blessed me with opportunity to play this chess combinations...my dream combinations

From below position, white to play and win. 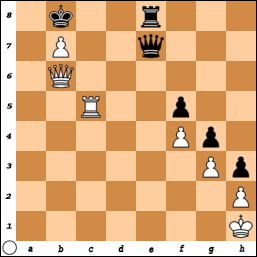 Let's evaluate this position, all check's point is guarded by black at least once while black is threatening Qe4 followed by checkmate, yet there is hidden win somewhere... 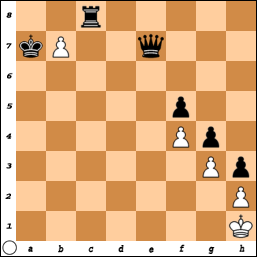 Brilliant! for the first two moves, white ‘sacrifices’, or maybe ‘invest’ his only pieces yet in one move, underpromotion no less, white sapu all black pieces and emerge a piece up! ...and on his way to bring both player's scoresheets to the arbiter.

Still remember how in early 90's i showed this position to my fellow Terengganu chess player...suddenly and uninvited, NM Peter Long came and shows the solution. :)
Posted by Ilham at 5:25 PM 1 comment:

Cannot blame if we to compare his achievement in Selangor Open is almost like Nadal at Monaco Open or Lee Chong Wei at Malaysian Open...total dominance. But is it all a walk in the park for Nicholas Chan?

Afraid not, unlike last year in which he left his opponent eating dust a full one lap behind, this year trophy is won in photo finish manner. Going into the last round, Jimmy Liew is leading the tournament and needed only a draw to become Selangor Open champion again for...god knows how many times (hard to keep track since Jimmy has been collecting Sel Open title since last century) but poor Jimmy stumble at the finishing line and zoom!..Nicholas and Udani are all smile when they together passed Jimmy to cross the finishing line together gether.

So ladies and gentlemen, winner of 38th Selangor Open with unanimous decision...NICHOLAS “THE SUPERSONIC” CHANNNNNNNNNNN.......

Trivias
1. Statistic.81 players from 4 countries took part. White won 145 times, black won 144 times and 62 games draw.
2. Best upset. Mat Zaki Yeop won against Kamaluddin (379 elo points difference)
3. Best escape.LZR in game, IM Srinath vs LZR. In a position in which i thought Rybka is about to announce white checkmate black in x moves. LZR put up a very resourceful defence to finally win the game.
4. Miscalculation. In round 9, Jax Tham...a pawn up, offered Irman a draw in which Irman immediately accept. Jax (6 points) finished at unlucky number 13, Irman (6 points) finished at number 6.
5. Poster boy for chess spirit. Syazrin playing chess..with fully inai fingers!
6. Resurgence of ‘relatively 'young’ Terengganu players. Rahim Ramli, Ruzenan and Fairul Yusof . Very realistic chances for all of them to finish top 10 but at the end, only Fairul Yusof manage to finish top ten.
7. Heart broken. Rahim needed only half a point from his last two games to finish top ten. He lost both his last 2 games...
8. Wander?. All this noise, all this excitement, all this fun...Where in the world is Abdullah Che Hassan?
9. Comeback (and disappeared again) kid. Mohan Raj
10. Reasons to play chess. One player told me, when playing his last round game, suddenly he remembered his old analysis of the opening...another player told me, he took part in this tournament to forget about all his problems...Well, remind me of lyric in The Eagle’s Hotel California
“Some dance to remember, some dance to forget...”
Posted by Ilham at 9:42 AM 4 comments: