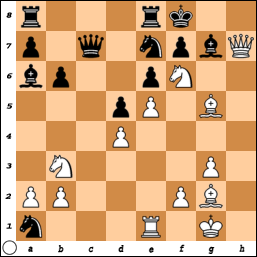 I AM IN!...CHESS CONNECTION GOLDEN SPECIAL

Najib Wahab is organizing the first FIDE Rated event of the Gregorian Year (...or maybe the last FIDE rated event of the Lunar Year) this coming Thursday at newly renovated DATCC and I am all in!

This event got all the ingredients and recipes, all the tick of good events under my checklist


My aim for this tournament is to finish among prize winner (and therefore gain, hopefully with moneylender-like-interest on my RM100 entrance fee), also hopefully to gain at least 7 Elo points (and in process pushing my ratings to above 2000) and last but not least…just to have fun!

So my fellow chess playing reader who has not yet registered to take part, you* are strongly encourage to do so this Thursday morning at DATCC (but please text Najib first, place is limited)

*preferably someone not so strong, don’t like to face gambit like opening and with welcome habit of offering draw in superior/winning position.

The 90s
Lets put it this way…in a language that today young generations, non chess players able to understand.

Ghalam and Norazmi are the ‘Apple’ and ‘Samsung’ of Terengganu chess in 90s…and this also put players like Hashim, myself, Arshad, gambit etc to mere ‘HTC’, ‘Nokia’, ‘Motorola’ etc.

The beginning
Like Kasparov, no one can claim he/she taught Norazmi how to play chess since Norazmi knows how to play chess by observing his friends playing this game. This is when Norazmi is in Standard 4 or 5 and stays at Police Quarter.

Unlike today when we can just switch on our PC/ Internet to find chess opponent, in early days Norazmi solved his problems in finding chess opponents by going out from his father’s police quarters and ‘surveyed’ the quarter/flat from afar and normally from this vantage points he can see at which unit there is a chess game being played for normally his neighbors will play chess with fellow neighbors outside of their unit.

The Sportsman
While most of us considered chess as our main sports/games and other games (if any) that we took is just a hobby…that cannot be said of Norazmi. He played almost ALL sports…and he played it competitively. Basketball, badminton, handball, marathon and God knows what else…Gosh, he even played Scrabble actively and used to be his university Scrabble Champion when he studied at US!

Maybe the only game he did not play is lawn bowl and poker…but then nobody is playing lawn bowl…and on poker, pretty sure Norazmi did not play it, unlike many of fellow chess players.

As such, of no surprise most of the time Norazmi can be seen entering chess tournament wearing sport shoe and track suit!...and on many occasion he quickly needs to finish his last round games “because I needs to represent Dungun in badminton”, "...because i will run marathon tomorrow morning" etc!

With all that sports that he played (and wins most of its), of no surprise that Norazmi ‘the chess player’ brings the aggressive aspect from above physical sports to his chess game.  Norazmi did not hesitate to leave his king ‘naked in centre’ (Arshad’s favourite comment on Norazmi’s games)  if he calculated it is ok to do so when 90% of players prefer to tuck the king into corner.  believe this is due to his strong calculation ability …he is after all one of his University best student in Mathematic. (Master level)

Talk about the aggressive…did you know that in 90s Norazmi is the feared discipline teacher at Kerteh? His reputation as a discipline teacher is legendary. He is like Albert Neri from Puzo’s Godfather novel…feared and respected…by both his student and his colleague.  Of course to those naughty student, Norazmi could be ‘Luca Brasi’ at his worst! :)

In 90’s Merdeka Team tournament, Norazmi once famously slammed down a chair in act of protest against what he believed as unfair last round pairing…Norazmi never shy to express his ‘view’ come what may….

But today Norazmi has mellow down a bit…with ‘Haj’ titled…number of his grandson keeps on increasing…become a lecturer at UITM…I could feel that, off the chess board, he has mellow a bit, no longer a rebel he once was…he now takes it easy…but don’t count on that to bring advantage to you in your chess game against him.

In chess he is still a fighter he once is, he is now and he will continue to be in future…

Success
Among the notable once is he was once Selangor Open Champ and many times represent Malaysia at International events such as Olympiad and Asian Cities etc.
Good luck and all the best Haji Norazmi Mohd Noor!
Posted by Ilham at 9:27 PM 2 comments: