TO MALAYSIA YOUNG WARRIORS...ALL THE BEST!

1. In few hour time, five our young warriors… tigers all… will start to unhide and using their sharp claws and fangs, display swift killing manouevre, show off awesome fighting power and roars mightily at World Under 16 Chess Olympiad. Don’t believe me they are all tigers?…I dare you to do the stupid thing like challenging anyone of them in chess game… in a word of Spassky when asked about Fischer, it is not whether you will win, it is whether you will survived!

2. 'They' above are refers (under no particular orders) to Yeap Eng Chiam, Roshan, Li Tian, Jianwen and Elgin Lee. Our junior but we all know, are all veteran in collecting success after success (and prize money too…) in chess.

Pss, Jianwen..i take take you will not play when our teams meet tomorrow, right? :) 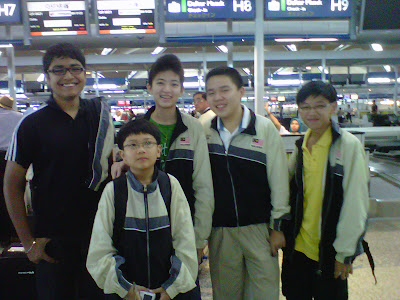 Natural Born Killer...Malaysian Junior. Go and get them, boys!
Pic from Jeffrey Wong

3. They are seeded 10th. Have I told you somewhere in my earlier unrelated posting that 10 is a nice number? The perfect ten, good striker wear ten, and NM LZR when he won this year national Closed, he was seeded number 10 etc ?...Well, now Malaysian Junior is seeded number 10th, ahead of Georgia and England, definitely a good sign!

4. Maybe Malaysia should be seeded higher, after all Li Tian and Jianwen did beat their opponent (Haslindah and Sumant respectively at FIDE rated DATCC Team Event) a day before their departure to Turkey so basically their ‘live rating’ is higher. Seriously consider informing the organizer about this so Malaysia can be seeded higher…maybe 8 (even nicer number)…but when I read about other countries junior achievement, like India’s Sahaj Grover who finished 5th at recently concluded Hoogeveen Open …with 2574 performance…well, maybe it is wiser if I keep silent on this.

5. To all Malaysia young, ruthless, warriors…good luck and all the best! Most importantly..have fun!

Earthquake
Turkey was hit by 7.2 Richter earthquake that killed hundreds. Our prayers are with the victim of this earthquake.
To all, i guess... not to worry so much about this. Distance between earthquake location and Istanbul is like 1200 kms…that is far…something like KL to Bangkok. Location wise also, it is close neighbour to Iran… that far.
Distance wise KL and Sumatera, which is of more active earthquake spot, are like 400 kms…we are in fact 3 times nearer to earthquake spot than them!
Posted by Ilham at 2:08 AM