This book I bought from Rizal (Rizal Chess Trading) at maybe RM60 (not sure) during this year National Closed. Malaysia chess book market is just blessed with many layers, depth, of chess market. For primary market there is book shop like MPH, Kinokuniya or maybe direct order from publisher. For secondary OTC (good books with affordable price) market there is the like of Rizal, Arshad, Mok Tze Meng, Naserov and others. For third market (photocopy), you know who the players are in this market!

The book is not the latest, hot from press book. It was published in 1997 but still in good condition and I think for sixty buck it just worth every ringgit...and for ELO 2000 player who love a good chess story, a good chess game, book that he can read in toilet or while waiting for his fried rice ready or his car wash ...it is just Godsend from Heaven!

Honesty
What drawn me to the book is the honesty that Speelman’s put into this book. If he don’t know he said he don’t know and if he used Fritz, he said so and in below position (Levitt vs Speelman 1982) which he thought he is ok, if not winning, he made a ‘…the psychological, if not technical mistake of turning on Fritz. It turn out White can inflict grievous damage with 28. f4!...’

Not many players will admit that they are actually , all this while, is in fool's paradise!

…and a story about player, a fine player who sealed ‘Resign’ inside the adjournment’s envelope.

…and a story about a player, a couple of queens down and facing a mate in two, reached the adjournment and adjourn his next move. Next day, in a cold Icelandic morning, the adjournment sessions duly started, minus the player who adjourn the game, who sealed ‘Good morning, asshole.’

And many other interesting stories scattered across the book.

Endgame
Since Speelman is a player who has wrote many books on chess endgames like Endgame Preparation, Analysing the Endgame and Batsfords Chess Ending, you can expect a great emphasis on the endgames in this book. An example is from below position between Speelman and Sosonko.

This book is definitely a treat for someone who wants to improve his/her endgame.

New words
I discovered many new English words such as prelate, ‘reginicide’, precipice etc, and even a new Latin word ‘reductio ad absurdum’.

First hand story.
Almost all games are from his owned experience and Speelman generously shared with readers what happen during the game. Eg. Kasparov vs Speelman Linares 1992 From below position.

“…Behind on the clock and with White starting to get organised, I started to feel very nervous, particularly given my atrocious tournament position as outlined in the introduction. Then I suddenly spotted a move to change the course of the game. I made no claim for its soundness, but just after eight minutes, before I could talk myself out of it, I bashed out:

Kasparov returned to the board. If 8 … a5 and 10 … a3 had caused something of a reaction, this was altogether in a different league. His eyebrows arched and he sank into deep thought.”

38 minutes to be exact! For the record the game was eventually draw. 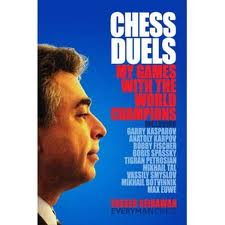 Next book I hope to read and give a review here is 2010 Chess Book of the Year. Seirawan’s Chess Duels. My games with the World Champion. This book is just full of great games (all Seirawan’s games against world champion), great stories and great behind the scene stories

Can’t wait to get myself this book. Anyone know where I can buy this book?
Posted by Ilham at 1:39 AM