Arrived at the hall at exactly 9am. Najib is currently briefing all players which i guess about the usual stuff, off the hand phone, keep quiet, toilet...hmm about toilet today Najib suggested that maybe toilet inside the hall could be reserved for ladies and kids and guys could use the outside toilets. S. Balendran informed that toilets outside do not have a running water. Najib, being Najib, flashed that megawatt smile and said “I reserved my comments” that brought laughter to the floor!

Round 5
On top two board, Loo Swee Leong and LZR continued their winning streaks by beating Li Tian and Eng Chiam respectively.

On my game, got into terribly awful position against Dollah, later Dollah blundered and i managed to equal the game, offered him a draw which he refused. Later he blundered in a tricky position (see below) 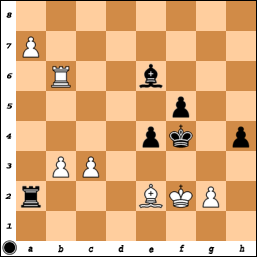 Round 6
The big news is ofcourse when LZR beat LSL to solely lead the field by one point gap. Now it is interesting to see whether LZR will continued his winning streak or will he collapse during the last few rounds ala Nat Closed 2009? Only LZR can answer this question.

The small news is i drew with crown prince of chess. :)