La Valletta, a city in Malta named after Jean Parisot de la Valette who has succesfully defending the islands from an Ottoman invasion in 1565, is also the host for 1980 Chess Olympiads.

Malaysia send a man team but not a woman team.

Malaysian Team
Malaysia was represented, according to the board order:

We have a nice mix of veteran (Jimmy, Foo, Fang) and first timer (Chang, Eric, Abdul Rahman). Of no surprise with this bunch of players we have performed a best outing so far.

As usual below are top 5 teams and neighbours placing.
1.Soviet Union (Karpov, Polugaevsky, Tal, Geller, Balashov, IM Kasparov) Sorry, could not resist to put IM here :-), a mighty team that consist 3 World Champs, past and present!

Singapore did not send their team while Thailand send theirs for the first time. 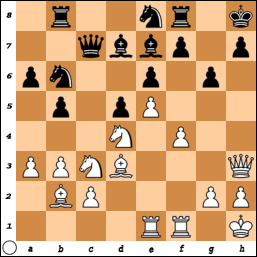 Black has just played 20. ...d5. From above diagram game continued