Yes, Terengganu has only one chess legend and his name is Ghalam Sani.

When it come to chess, Ghalam is the household name in Terengganu. Chess player and non chess player alike in Terengganu knows Ghalam. Go to any chess bangsal, be it at Besut or Kemaman, they know Ghalam. My father, a non chess player, always believed that i will be a national champion :-) , should i have meet Ghalam earlier (I first meet Ghalam when i was 14). Even outside Terengganu (especially in 90s), whenever i introduce myself as Terengganu chess player, immediately i will be considered as Ghalam's student (which is true and which i'm proud to carry)

Who is Ghalam?
Ghalam burst into a local chess scene in 80s after he obtained his law degree from one of UK's top university. He represent Malaysia in various chess tournaments such as Asian Cities Championship (1991, 1996), South Africa International Chess Tournament 1995 and others. Ghalam is most dangerous at his own turf, he once beat GM Dao (Vietnam) and become champion in one of Terengganu Open tourney in 90s.

Ghalam however do believed in endgame.

Endgame.
Ghalam's forte is endgame. Somehow in the endgame, Ghalam's pawns seems to move faster (while during opening his pawn always seems to move slower) and Hashim Jusoh has once said that Ghalam is one of the finest endgame player in Malaysia. He know all the intricite defence of rook vs queen endgame. Checkmate by using knight and bishop? i bet Ghalam can do that blindfolded! I suspect Ghalam also know about the Troizky Line in 2 knights vs pawn endgame.

Below is the typical Ghalam's endgame technique played at Asian Chess Championship 1996. His victim is aggresive David Chin. From equal endgame he slowly and surely outplayed his opponent. 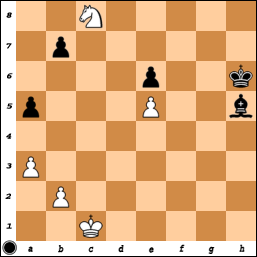 Run through the above endgame with your engine and you can see that Ghalam played almost perfect ending.

Personality
Personality wise, Ghalam is easy going person, love to sing, love to laugh and always willing to help those in need. On many occassion, i have seen people approach Ghalam asking for help, like Don Corleone, he will listen attentively and blink! problems solved! His networking is fantastic. Politicians, CEOs Ghalam knows them all. Rumours have it that he is on the first name basis with current Terengganu Menteri Besar Dato Ahmad Said and he is also very closed with Dato Sabaruddin Chik.

I myself has once asked Ghalam's help to prepare cover letter for my resume. He immediately whisked his shiny Mont Blanc pen and started drafting a cover letter in his perfect and flawless Cambridge English. I got the job.

Retirement
Somehow, beginning from early 2000 Ghalam seems to 'retire' from active chess. What a waste! I do hope that should Ghalam read this posting he will reconsider his chess 'retirement' and continue to play active chess, just like the good old days.
Posted by Ilham at 8:20 AM