WHEN KING AND QUEEN LEAVE THE THRONE...

Introduction
This game is the first chess game that left such an impact to me. How 2 knights ‘dancing and prancing- Chernev’ and at the same time dethrone king and queen is simply amazing. Final position in which, I quote Chernev again “…King and Queen have fled, and the white knights occupy their thrones” is picturesque! 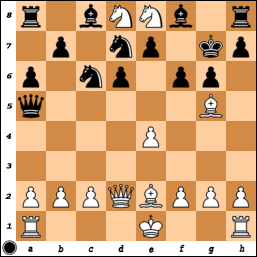 I first encountered this game on my first chess book titled ‘Main Catur’. It was written by Esa bin Abdul Rahman and published by Dewan Bahasa dan Pustaka in 1978. My late mother bought this book for me in 1985 from one of those book shop at Jalan Tunku Abdul Rahman and I literally read this book from cover to cover, self-taught myself the notation…in Malay! Like if the move is 1.f4 the notation is 1.B-GR4 (Bidak Gajah Raja 4)

From the final position it is mate in four.

The Impact
This game made such a strong impact on me and for a self taught kid I have come to a conclusion that:
1. Knight is stronger than bishop and rook. Maybe slightly weaker than queen.
2. Sicilian is not a good opening. Black is slow in developing its pieces.
3. Khylober (who played white) must be a super strong player. Is he a world champ in 1942?
Now, 27 years younger…I think I know better…

The History
Ok, I first encounter this game via my above mentioned ‘Main Catur’ book in 1985.

13 years later, when I first started working at KL, I bought a second hand Chernev’s 1000 Best Short Games of Chess from at then the happening Yaohan The Mall for RM25. Perusing the book from my rented room I discovered
1. The previous owner of this book is Dr Foo Lum Choon, Singapore.
2. And above game (Game number 150) under grouping ‘Knight Gallopings’

Few years back I again encountered this game at chessgames.com but the player of the game is not Khylober vs Nagy 1942 but Walter Arpad Foldeak vs Nagy, Budapest 1942...but honestly who cares, a rose by any other name would still smell as sweet.

So yesterday i revisit this game again and discovered under the game's comment it is actually same person. Until 1948 his name is knight Khloyber Walter, after it Földeák Árpád...

Ah, even better! A wonderful knight's galloping game by knight Khloyber!
Posted by Ilham at 5:35 PM