Before
A simple mathematic equation, afternoon rain...plus afternoon before Depavali...plus DATCC is located just a stone throw away from Masjid India are equal to traffic jam...so it is no surprise that when the game begin at 7pm, almost half of the players are yet to arrive. However by 7.30pm, most of the players are here already.

Results
Cannot blame if result wise, one thought that this is a first round...just so many 4-0 results!
Too less ordinary produce an extraordinary result beating DATCC Sr 4-0.
Carikomputer turn to ‘Carimangsa’ behaviour by defeating BERNAMA 4-0.
And 17 chess club joining the 4-0 clubs above by winning against renegade 4-0

Games
Of interest are Udani vs Jimmy (Jimmy lost), Haq vs Izz (Izz won in an exciting rooks ending, also the last game to finish) . Andrew , a pawn up, blundered a piece when allowing his opponent, Syed of 17 CC, a nice combination. Thanks Andrew :) .

My Game (Ladies Night)
Played against Haslindah. I was lucky to win. Honestly i was thinking of resigning the game on move 11. Yeap, move 11!

See below position. I am having a black pieces. 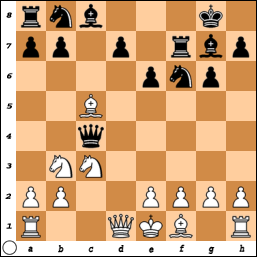 My black lady has ventured alone, shopping for a cheap c4 pawn, at my lady opponent’s territory. Ofcourse, after e4!, she’s dead and i can safely resigned and can go home to be with my lady and two girls and maybe watching some girlie TV show ( I am always out vetoed) ... Anyway, she played e3? Phew!!

Guess ladyluck is smiling to me...:)


Others
Yes, no 10pm disco beat...replaced with 12am firecrackers!

Wan Shahrina (BERNAMA) is not here tonite.
Posted by Ilham at 1:38 PM