IN SEARCH FOR KNOWLEDGE

Year 1990. I was in form four (so called honeymoon year) and my desire to improve my chess is simply overwhelming. I have borrowed most of the chess books from Dungun and Kuala Terengganu library. Have also religiously collected and compiled chess articles from newspaper. I saved every dime and nickels to buy the expensive chess books and magazines available then.But how do i go from here. How can i owned more chess materials.
Voila! Suddenly an idea begin to form...
The plan
I will write to every chess publishers, coaches or any shops that got to do with chess that i can found at the back of chess magazines and hopefully, they will reply to me and hopefully again, their reply will include some chess materials.
The result
To my pleasant surprise, most of the publishers did reply to me. I remembered receiving catalogues about Mephisto chess computers, 3 CHESS magazines that featured young Polgars, some postal chess magazines, a letter from NM Alex Dunne, magazines about Novag computers etc.
After that it just getting better.
I received a signed EG magazine from John Roycroft, a renowned British's endgame specialist and one fine day i received a large brown envelope from International Chess Enterprises, Inc. Inside it are 3 INSIDE CHESS magazines with one of it got GM Yassser Seirawan's signature on it! and not just that, there is also a letter from Yassser Seirawan thanking me for writting to his company. Yasser Seirawan thanking me !? Oh my God, it just really to good to be true, Unfortunately i have lost that letter but anyway i still keep the signed magazine. 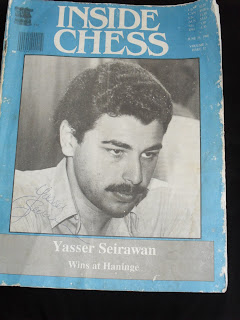 To me, this INSIDE CHESS Magazine not only reminds me of my search for chess knowledge, it also reflect a kindness act from top GM to a stranger from a far away place.
Posted by Ilham at 7:35 AM