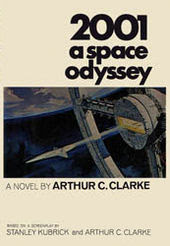 This blog is inspired by Arthur C. Clarke's novel, 2001 A Space Odyssey. A classic novel about how in 2001 man went to Saturn to investigate about a sign of intelligence signal coming from one of the Saturn's moon.
Worth mentioning is how the author's vision about the chess computer (Hal, which is also the computer that control the spaceship and later went cuckoo) that is so strong that "If Hal went all out, he could win any of them; but that would be bad for morale. So Hal had been programmed to win only fifty percent of the time..."
Interesting!

This novel is written in 1968 before man went to the moon and ofcourse 4 decades before Fritzs and Rybkas roaming the earth!
Just like Bowman in 2001 that venture to Saturn,i will try to use this blog to venture to chess blogging world.
Posted by Ilham at 6:26 PM