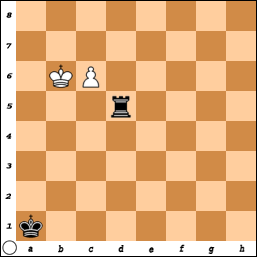 White to play and win


We all love underdogs. David vs Goliath, Rocky vs Ivan Drago (Rocky IV), Nelson Mandela, Gandhi etc. There is something magical when the underdog beat the top dog, especially so when the odds are overwhelmingly against the underdogs.

Take a look at above position. This is the position in which a lowly pawn able to beats the raging rook and it come with the good story.

But hold on! It just getting better!

Instead of promoting a pawn to a queen and draw, white can promote a pawn to a rook and win!

In such a simple position surprisingly there are lots of play. Queening threats, under promotion, stalemate threat, domination and ofcourse underdog (pawn) beat the top dog (rook)!.

This position therefore has been named 'Saavedra Position'

But, is our friend Fritz agreed with above line?

Art Killer
Unfortunately, Fritz believe above line is not a best defense for black. Fritz like this line better (but nevertheless still a win for white)
1.c7 Rd6
2.Kb5 Rd5
3.Kb4 Kb2
4.c8=Q and now it is a battle between a queen and a rook which is with exact defense, should be difficult for white to win.

To see Saavedra in action, you may see Svidler vs Topalov(Linares 2006) game. Beautiful and highly imaginative endgame play by Svidler, sacrificing a whole rook to reach Saavedra like manouvre, not to be out done a few moves later Topa sacrifice his rook hoping to reach a stalemate defence. It didn't work.