A couple of postings ago GM Susan Polgar visited my blog and drop a few lines. I was like...wow! it is not everyday that Grandmaster visit my blog but then again i did not know much about her (unlike her youngest sis, Judith Polgar). Ahh, what the heck, she is just an ordinary GM so I thought but out of curiousity, i do some research about Susan Polgar and found below interesting info about her.

1.She won Hungary under 12 girls with perfect score (10-0)...at the age of four! Yeap no typo here F.O.U.R. Wonder whether she is still wearing diaper when executing checkmate after checkmate! :)

2.She composed (and it got published!) her first chess problems (see below) also at the age of 4. Amazing! While most of the four years old could only come up with the trick to get candies, she already could compose below chess problem which required some form of chess mastery and creativity to create it.

White to play and mate in 2 moves 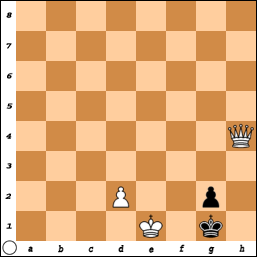 4.She was World's highest rated player (female) at the age of 15.

6.She could speak 7 languages (Hungarian, English, German, Russian, Spanish, Hebrew and Esperanto). Esperanto ?! Esperanto is the language created in 1870s with the idea to foster harmony between people from different countries, races and to be world’s second language.

7.She is also world record holder for most consecutive games played (1131 games:1112 wins, 14 draws and 3 losses). This world record still unbroken until now.

Like Gary Kasparov, she is now no longer active participating in chess tournaments but very active in chess development especially in Texas.

It is of no surprise that National Geographic chose her as subject for a documentary titled My Brilliant Mind.

Well, for me... now i know for sure GM Susan Polgar is definitely not an ordinary GM as what i initially thought!
Posted by Ilham at 2:30 PM