Jack of all trades, master of all.
If there such a title as Malaysia Most Complete Chess Personality, Mok Tze Meng …sorry, I mean IM Mok Tze Meng, would surely win it hands down.
As a chess player, he holds theIM title, peak strength of ELo2416, once nominated as candidate for Perlis Sportsman of the year etc.
As a chess coach, NM Lim Zhuo Ren and NM Edward Lee are among his student . Enough said though he actually also involved in coaching for schools, clubs etc.
As a chess entrepreneur, via Intelligent Minds Academy , you can always count on him to quote a competitive price for chess equipment (books, clocks, etc).
As a chess tournament organiser, his 2011 Hillcrest Open is arguably among the best local tournament this year.
As for involvement in chess association, he is vice president of CAS and committee member of MCF
As a chess blogger…well, err, hmm…ok, I think if he puts more time and efforts on it, it will surely be one of the top chess blogger in Malaysia.

Mok Tze Meng actually are more than above. He is now into arbitership (second in his class), father to a chess player, captain to Malaysia chess team on various outtings etc. He is also perhaps the only Malaysian player who got opening name after him (Mokdern Defense).
In banking there is this term ‘financial supermarket’ to financial institutions that could offered variety of services to variety of customer, not wrong to say Mok is our chess supermarket.

Early days
I first heard about Mok via newspaper articles in late 80’s, most probably on Chessmate, about one Sarawakian player who shuttle/fly regularly to take part in chess tourney at KL…and this is time before ‘now anyone can fly’ era!

He later settled down at Kuala Lumpur.

He won his first National Closed in 1990, a feat which he repeated in 1992, same goes with Selangor Open, God knows how many times he won.

I first know him personally in early 90’s as the unofficial banker to encash the cash cheque. Still remember whenever I won a few hundred bucks in tournament and it is in the form of cash cheque, Mok is the ready banker to cash it, normally half via buying his chess books and other half cash.Of course at that time outside of the chess world he was a banker in trade finance department.

One good thing in buying books from Mok is you will get advice or summary about the books. Oh, not recommend this book for you or Hey, this book is for you! Etc. You have the feeling that he knows his stuff, he knows his customer.

Later when I settled down at Kuala Lumpur in late 90s, we sometimes met at Royal Selangor Club and Agus’ house and various chess tournaments.

Chess style.
His style of playing is simple, positional and with strong endgame technique. He is not into wild swashbuckling attacking ala Tal or Shirov but rather crystal clear strategic play ala Fischer or Capablanca.

Maybe, just maybe that his Achilles Heels is on his opening repertoire. His choice of opening is however rather limited (Ruy Lopez Exchange and Modern Defense) and in the era of internet, databases…he maybe needs to widen his openings. Anyway don’t be surprised, before his love affair with Modern Defense, Mok used to play double edge opening such as Dragon and even Alekhine!

Below is sample of his endgame mastery at best. He is one pawn down in rook ending against an active GM...and playing at GM's own 'stadium'...where local considered Utut as national hero...it can be intimidating. 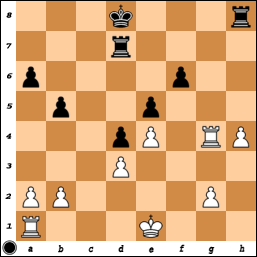 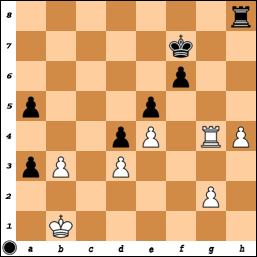 7 ... f5!!
sacrificing a pawn. Mok has seen deep into this endgame.
8.ef5 Rg8!!
now when he is a pawn down...and just created pass pawn to his opponent, he offered to exchange rook? Rook actually cannot be taken. Black's passed pawn (s) are faster.

9.Re4
Only move to draw. Other move lost for white!

Chess Progress.
Mok’s progress as a player can best be described in steady 10 years leap. Roughly in early 80’s(or maybe late 70’s) he started playing the game, in 1990 National Master (NM), in 2000 FIDE Master (FM) and in 2009 International Master (IM)…based on that steady progress, who are we to say in future he will not obtained that elusive GM title once he set his target on it?

Next month he will be taking part in Yangoon GM chess tourney…2010 Chess Odyssey wished him all the best.
Posted by Ilham at 2:48 PM